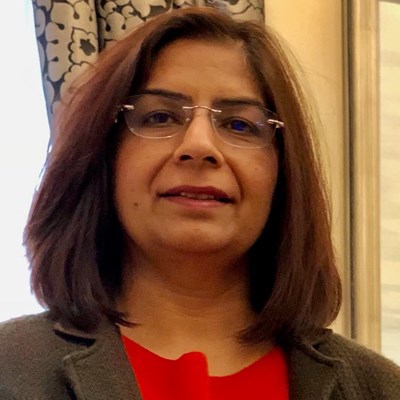 Madhu joined The Royal Wolverhampton NHS Trust as a Consultant Anaesthetist and Clinical Lead for Day Surgery in 2004. She took on the role of Clinical Lead for Pre-Operative Assessment in 2008 and was instrumental in centralising and streamlining the pre-assessment service.

Madhu has been the Clinical Director for Anaesthesia, ICU and Theatres for the last three years. During her term she supported the Trust to deliver elective and urgent surgery during the first surge of COVID, implemented various clinical pathways and provided ongoing Critical Care Support.

She was co-opted as a member of the Council of British Association of Day Surgery (BADS) in 2008, before being elected to the Council in 2010. In 2014, she became the Chair of the Editorial Committee, in addition to her pre-existing role of the Website Lead in 2013.

Madhu joined the General Assembly of the International Association for Ambulatory Surgery as BADS/UK representative in 2018 and has recently been appointed as Editor-in-Chief for the journal Ambulatory Surgery.

The aim of the IAAS is to promote the development and growth of high-quality ambulatory surgery worldwide. To this end, it encourages an international exchange of ideas and stimulates programmes of education, research and audit and has members from over 22 countries.